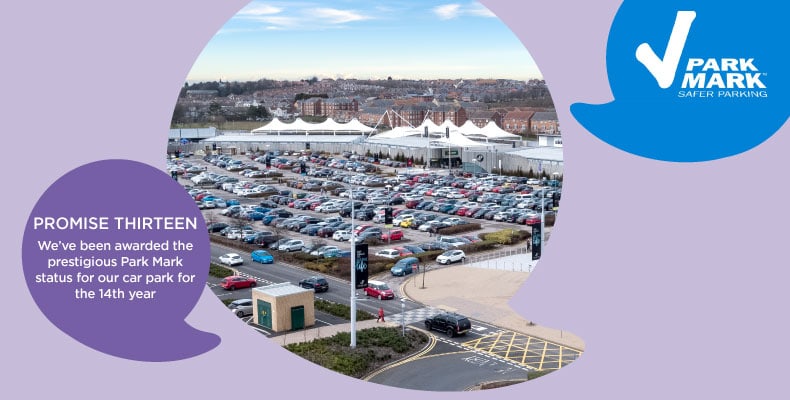 Dalton Park’s car park has retained its status as one of the safest in the country after winning a national award.
As part of the nationwide Safer Parking Scheme, we have been awarded the prestigious Park Mark status for the 14th year in a row, after meeting strict standards of a rigorous assessment carried out by the police.
Only a quarter of the UK’s car parks have achieved the standards required and the distinctive Park Mark signage helps drivers find facilities where they can confidently leave their car.
Dalton Park’s 1700-space car park was first praised for its standards in 2004 and received its Certificate of Achievement in 2014, which recognised a decade of commitment to the Safer Parking Scheme.
Jerry Hatch, Centre Manager at Dalton Park, said: “I would like to once again congratulate our hard-working team who work tirelessly to ensure Dalton Park meets the very high standards set by the Safer Parking Scheme.
“The Park Mark status gives our customers the ultimate peace of mind when parking here and we are very proud that our efforts have been acknowledged for the 14th year running.
“We feel that this recognition, along with our recent Platinum Grading at the Loo of the Year awards and the introduction of our ‘Quiet Shopping Hour’ demonstrates our commitment to ensuring shoppers enjoy a first class experience here at Dalton Park.”