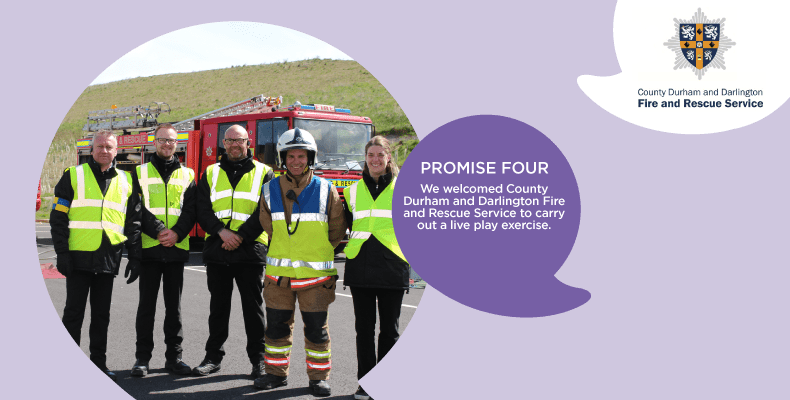 We joined forces with three regional Fire and Rescue Services and more than 200 pupils and staff from local colleges to carry out a huge live play exercise.
County Durham and Darlington Fire and Rescue Service along with its partners from Tyne and Wear and Cleveland took over an area of Dalton Park for a decontamination exercise.
Pupils and staff from colleges took part as casualties and our team were on hand at the start of the exercise to inform first responders of the situation.
The aim was to test new and existing procedures and capabilities, promoting joint fire and rescue services working together. In addition, it gave crews the chance to analyse the mass decontamination mobilising model for emergency response personnel and control staff.
Ray Sillito, Emergency Response and Resilience Planning Officer and HVP Lead from County Durham and Darlington Fire and Rescue Service, said: “We would like to thank the team from Dalton Park and everyone that took part in this successful, cross-regional exercise.
“The role of Fire and Rescue Services continues to grow in complexity and it is vital that we are supported by the community to ensure that training is as realistic as possible.
“Organising a drill of this size isn’t easy, so it is great when businesses and organisation like Dalton Park and the various colleges offer their help and support.
“We look forward to working with them again in the future.”
Jerry Hatch, Centre Manager at Dalton Park, added: “We were more than happy to facilitate the exercise as it is imperative that training is carried out in situations that are as close to real life as possible.
“It isn’t until you actually see the crews in action that you realise the enormity of their responsibility, and we stood in awe as they dealt with what would be a catastrophic situation with the utmost professionalism.
“Taking part also allowed us to carry out the fourth of our 15 pledge promise, that we have committed to during our 15th anniversary year – a promise to support the emergency services wherever we can, whether that is a live training venue or space to carry our exercises such as this, or mall space to engage with our customers.”
Next month, we will be welcoming PSCO’s from Durham Constabulary, facilitating a space for the team to carry out various scenarios.