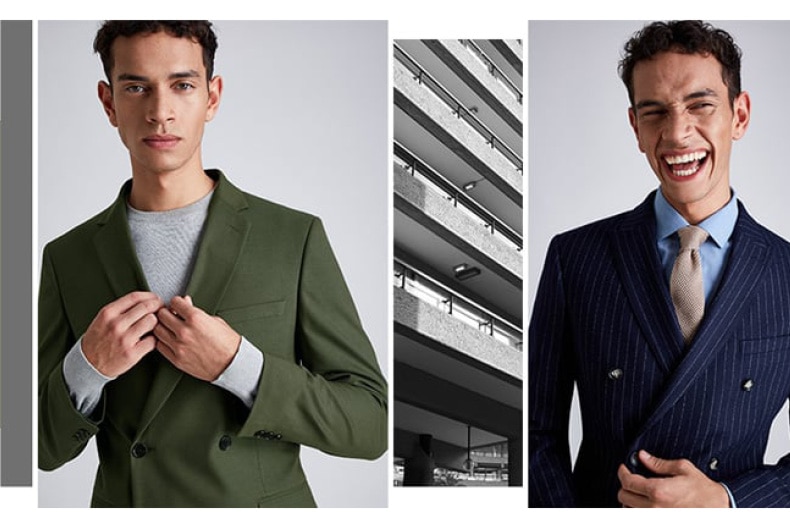 Forget the boxy shapes of the 80s or the baggy styles you see in gangster films, the new doublebreasted suits have trim silhouettes and slick detailing.

Who says double-breasted has to mean formal? Moss Bros. have updated their menswear stalwart in on-trend colours and added stretch for a more relaxed fit, like this Moss London khaki version that’ll make a powerful addition to smart-casual set-ups. Or show you know your tailoring references and take on a double-breasted suit in a pinstripe fabric –traditionally the garb of choice for power-play in the City, this one’s brought up to date with a skinny fit and a textured crepe stripe.

Double-breasted suits traditionally have a peak lapel, but Moss Bros. have pared back to a more modern notch lapel on their Moss London versions. Take the look into truly modern territory with Moss Bros. new cropped trousers. Cut in their skinny fit, they’ve got their usual creased front but with a little extra knocked off the bottom to make the most of bare ankles (or a cracking pair of socks, if that’s what you’re into).

Of course, the double-breasted suit will really come into its own in more formal workplaces. The Moss 1851 double-breasted suits, like this one, stick to the classic peak lapel, which along with our tailored fit creates a flattering V-shape that slims your middle and broadens your chest and shoulders.

True traditional DBs have up to eight buttons, but Moss Bros. have kept theirs to a respectable six to nod to the suit’s heritage but ultimately keep things contemporary. Although you can wear your double-breasted jacket undone, it’s designed to be worn fastened up. The vertical lines of the buttons actually have a slimming effect too – just remember to never fasten the outer bottom button.
SHOP DOUBLE BREASTED SUITS AT MOSS BROS